The company Pereira D’Oliveira ((Vinhos) was founded in 1850, and is still in the hands of the founding family. It has however grown by acquisition and can trace its roots back to the 1820’s. Its Headquarters in Funchal dates to the 1600’s!

D’Oliveira is reported to produce about 150,000 litres of Madeira wines per year, and produces a wide range of wines including Tinta Negra wines at 3, 5, 10 and 15 year old.

D’Oliveira also produces Sercial Verdelho, Bual, Malmsey and Terrantez wines. it does not appear to favour the more exotic blendings of grapes that some of its peer producers are increasingly experimenting with.

D’Oliveira’s is believed to have very considerable stocks of older Madeira wines – some 1.5 million litres, including wines from long gone producers subsequently acquired by this firm. You can see Madeiras of great age in the tasting rooms, both in bottle and in the barrel.

The wines are widely available across the island and at the airport, often in attractive packaging making an ideal gift.

The friendly tasting rooms in central Funchal are well worth visiting. 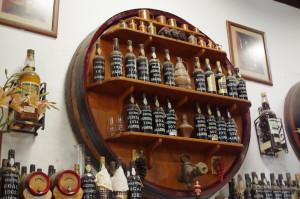