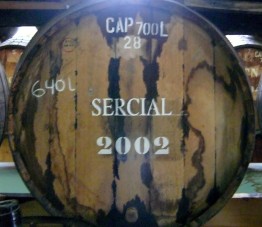 Sercial aging in the barrel at Henriques and Henriques

Sercial is the driest style of Madeira wine, and is pale in colour, and quite lightly perfumed. The wine matures into a wonderfully mellow but dry wine (and not as crisp and salty as Manzanilla sherry). Instead  Sercial is smooth with subtle flavours of nuts, especially hazel nuts and almonds, the wine has very gentle overtones of wood and a delicate touch of crisp apples. This is a delicate fresh wine that makes an excellent aperitif, and at 18 or 19% ABV is best served in smaller glasses.

Sercial is often served as an aperitif, and can be enjoyed lightly chilled, and accompanies salted almonds, olives, smoked fish and oysters as well as cured meats.

Sercial is particularly pleasant with goats cheese and other dry astringent cheeses such as feta, the Portuguese cheeses to look out for Queijo Fresco; Requeijão; Portuguese Chévre; Rabaçal; Picante de Beira Baixa

This wine is also a great accompaniment for certain cuisines

This wine accompanies Chinese foods particularly well, and a glass of Sercial with a Chinese banquet is certainly superior to a Pouilly Fume or Sancerre, and is certainly not as strong as a glass of VSOP Cognac!

Another excellent combination to enjoy Sercial is with tuna sashimi and sushi in general and of course Madeiran limpets…..a great delicacy of the island and the only truly native shell fish on the island.  Madeira is an excellent island to enjoy the freshest of fresh tuna.  The light delicate notes of Sercial will not overpower the delicate flavours of seafood. naturally Sercial will accompany that Madeiran delicacy Espada.

By itself or with a mixer

It is not unknown for Sercial to be drunk as a long drink with tonic…..which is excellent on a hot day in Madeira. The dryish salty tang of Sercial makes this a wonderful drink to be treasured.

A 5 year old Sercial is probably the youngest wine to buy of this grape, as this grape is quite astringent (the grape is known by the nickname “Dog Strangler” in Portugal and not surprisingly is quite unappetizing as a table grape). At 8 to 10 years Sercial is exhibiting its unique and has quite wonderful qualities as an aperitif or as an accompaniment to fish dishes such as sushi. In my view 10 year old Sercial is well worth the investment.

A wine labeled  Seco – Dry but not Sercial will be produced  with the Tinta Negra Mole grape at the heart of the wine.

Why we should love Sercial

This is a grape that is quite difficult to grow, and it is produced in relatively small amounts mainly on the north side of the island, and wine lovers of the world should treasure this unique wine. The wine cognoscenti increasingly are!

These tasting and accompaniment recommendations are equally applicable to Madeira wines labeled Seco – Dry. A 5 year old Seco (and older) is likely to contain a proportion of Sercial in the blend and will almost but not quite replicate the sheer enjoyment of this wonderful wine, (learn more about a Madeira wine bottles labeling).

Sercial is grown in small quantities in Madeira, and you can read more about this unique grape: Sercial and the Madeira wine bottlers who produce this wine.

Between 35,000 and 47,000 litres of this wine is produced on Madeira annually. The majority of this wine will be produced using the canteiro process.

The Terrantez grape that also produces a dry Madeira wine is produced in even smaller quantities, about 1000 litres in 2010 and 4500 litres is 2013. Terrantez is almost a cross of Sercial and Verdelho.