Discovering Madeira, the island, not the wines….yet! 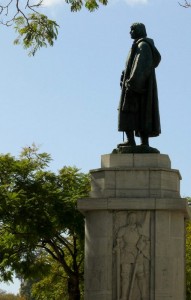 Madeira was first discovered by the Portuguese navigators João Gonçalves Zarco and Tristão Vaz Teixeira in 1419. With its high cliffs and mountains, and often with a cloudy top as in the illustration above, it must have been visible to Zarco for many miles before he arrived and put ashore.

A statue of Zarco stands proudly in central Funchal. He may just give you a gentle nod in appreciation for visiting his beautiful island.

Madeira was settled rapidly by the Portuguese, with its abundant fish stocks to support the settlers whilst the heavily wooded island was cleared for agriculture. Indeed the literal translation of Madeira means “Wood” and Funchal (the capital city) means “fennel” in Portuguese.

In the enviable climate of the cleared island agriculture and viniculture quickly took hold, and the island grew prosperous as it was especially suitable for sugar production. The vestiges of this are still visible today.

Madeira soon became an important calling off point for the growing number of ships plying the Atlantic in the 16thcentury onwards. Indeed as the drawing above shows, Madeira can be seen by mariners from great distances due to its topography and the clouds that gather around the mountain peaks of the now extinct volcanoes that created this wonderful island.

Mariners are well known worldwide to be “thirsty” individuals, and as well as food stuffs wine was an important part of any voyages victuals. The desire for “alcohol” was not however the principle reason for taking barrels of wine from Madeira on a voyage, but the fact that wine will keep in barrels far longer than water will.

Wine being delivered and shipped out to the waiting cruise liners of the day!

Buying Madeiran wine when not in Madeira

The good news is that it is now quite easy to buy Madeira when not visiting the island as many specialist wine merchants will deliver Madeira to you without to much trouble.

Some of the best wine merchants are to found on the Internet.

The Discovery of Madeira wine

Eventually the practice emerged of shipping Madeira wines on long effectively circular voyages where the wine was gently heated through and agitated.  The result of this was firstly an improvement in the wines drink-ability,  but crucially due to this oxidisation process it was discovered that the wines of Madeira will keep to great ages….even when opened they will keep in excellent condition for you to enjoy for several weeks! And so Madeira wine was discovered, and soon became one of the worlds first luxury goods, renowned for its sweetness and smoothness, and  revered for its ability to age!

Quite who discovered that it was the heat that had the desired effect on the wines, and not the motion of the sea is not known, but the practice of sending Madeira wines on long voyages of maturation has now ceased. This was known as “vinho da roda” – wine that had been transported to India and back and means “Round trip Wine”. Now you only have to make a trip to Madeira.

You can read about how Madeira wine is made  and understand why these old barrels are slumbering in the roof tops in downtown Funchal where many of the producers are based, a little about the Madeiran menu and importantly what food on the menu best accompanies the differing styles of Madeira wine: Sercial, Verdelho, Bual and Malmsey and what to look for on the labels of Madeira wine bottles.

Here is a wonderful, if over the top Madeira wine promotional video.

The  Madeira wine producers are Barbeito, Blandy’s (who also include Cossart and Gordon,  Leacock’s and Miles), Borges, D’Oliveira, Faria, Henriques and Henriques and Justino’s and it is possible with some organization and planning to visit them….indeed it is strongly advised.

If you cannot visit take a look at some recommendations of where to buy Madeira wines online.