Madeira wine is produced from a number of grape varieties that must be grown on the island. The Madeira wine industry is governed by European Union legislation and this managed by IVBAM – which is the Madeira Wine, Embroidery and Handicraft Institute. IVBAM operate the brand Vinho Madeira and promote Madeira wine worldwide.

It is IVBAM that manages the many confusing EU regulations regarding Madeira wines, and the grapes from which wines can or cannot be produced.

There are broadly four different styles of Madeira wine, dry, medium dry, medium sweet and sweet. In some instances different grapes are used to produce different wine styles, as is outlined below.

In other instances one grape is capable of producing wines of differing styles. Reading the information below and paying attention to the label will help you make an informed choice.

Both grape and age are hugely important, as well as the method of how the wine was produced.

While the regulations can be confusing and quite technocratic, the EUs involvement  (and its structural funds) have undoubtedly supported the Madeira wine industry. The work of IVBAM and the EU has managed progress, production and quality improvement while ensuring the rich tradition of Madeira wines have been maintained and indeed enhanced.

A Madeira wine drunk today is of greater quality, with a clearer provenance than in the 1970’s and 1980’s.

Madeira wine growers after the phylloxera outbreak had planted a large number of hybrid vines of American and European origin. These vines were threatening the survival and undermining the historical provenance of the 4 noble grapes that had traditionally produced the 4 styles of Madeira wine,Sercial, Verdellho, Bual and Malvasia.

During the 1980s at the behest of the EU these vines were removed from production, replaced partially by the 4 (+1) noble varieties of grape (Sercial,Verdellho, Bual and Malvasia plus Terrantez) and the dominant Tinta Negra Mole grape which is used to produce Madeira wines of almost equivalent taste to the Noble grapes. Tinta Negra still represents the overwhelming volume of Madeira wine produced today.

This grape is remarkable in its acidity and produces exceptionally dry wines. The vineyards are located on the south of the island at Jardim da Serra, above Estreito de Câmara de Lobos at altitudes reaching 600m – 700m high and on the north coast around Porto Moniz and Seixal (where its name comes from), where it is planted a lower altitudes, at 150 – 200 metres.

It can be clearly seen clinging to the hills on the north coast, often being protected, but I believe the salty atmosphere contributes to its wonderful taste.  It has a very late maturation, being normally the last grape variety to be picked. Sercial wines are dry, pale, light bodied and extremely fresh and quite un-edible as a grape. You can read more about Sercial, its taste and what to eat with this wine here.

Verdelho: Planted at altitudes up to 400m high, this varietal is located on the north of the island in the areas of Ponta Delgada and São Vicente. The grapes have a late maturation, (normally by the end of September) and produces gold coloured medium dry elegant wines which have a tropical and exotic character. You can read more about Verdelho, its taste and what to eat with this wine here.

Bual: (or Boal as it is also called), is found mostly on the south of the island, in the areas of Camapanário and Calheta, located at altitudes ranging between 100m and 300m. This varietal matures early on and produces light copper-coloured medium sweet wines that are medium bodied, round, rich in spice and dried fruit notes. You can read more about Bual, its taste and what to eat with this wine here.

Grown almost exclusively on the south side of the island at lower altitudes (150m – 200m), this varietal is the first to be harvested, having an early maturation. The grapes are sweet and produce rich full-bodied wines that are dark in colour. On the mouth, the bouquet reveals notes of spices and honey and taste quite wonderful and is usually bottled under the name Malmsey.You can read more about Malmsey, its taste and what to eat with it here.

There is infact a 5thand 6th noble (?) variety, that is produced in tiny quantities, and that is Terrantez, with maybe 2000 litres being produced annually.

This grape is making something of a comeback, but is still rare and fragile, this varietal has always been used in the production of premium wines, achieving high prices in the market. Due to its fragility, it has been replaced by more prolific varieties, and was therefore almost brought to extinction. This varietal produces off-dry wines.

There is a less well known noble grape and wine recognised by IVBAM as Madeiran wine called Bastardo which is even closer to extinction, with production in 2011 and 2012 miniscule: under 100 litres. This wine is very difficult to grow.   Bastardo is the only Noble wine that is red.

The only red grape variety. Versatile and productive, it accounts for approximately 90% of the island production, being used predominately to make 3 year old wines, although not exclusively. Depending on the altitude, humidity, region and solar exposure, the grapes can deliver richer or drier wines.
Indeed, so successful was Tinta Negra Mole that it was in danger of completely eclipsing the 4 noble grape varieties. Tinta negra mole is much for flexible in that it is capable of growing at differing altitudes and produces higher yields per hectare, and is quite capable of producing wines of quality and similarity to the 4 noble varieties.
For an understanding of the volumes produced on Madeira and the dominance of Tinta Negro see this chart. For an understanding of what will be in the bottle see this page on reading the label. 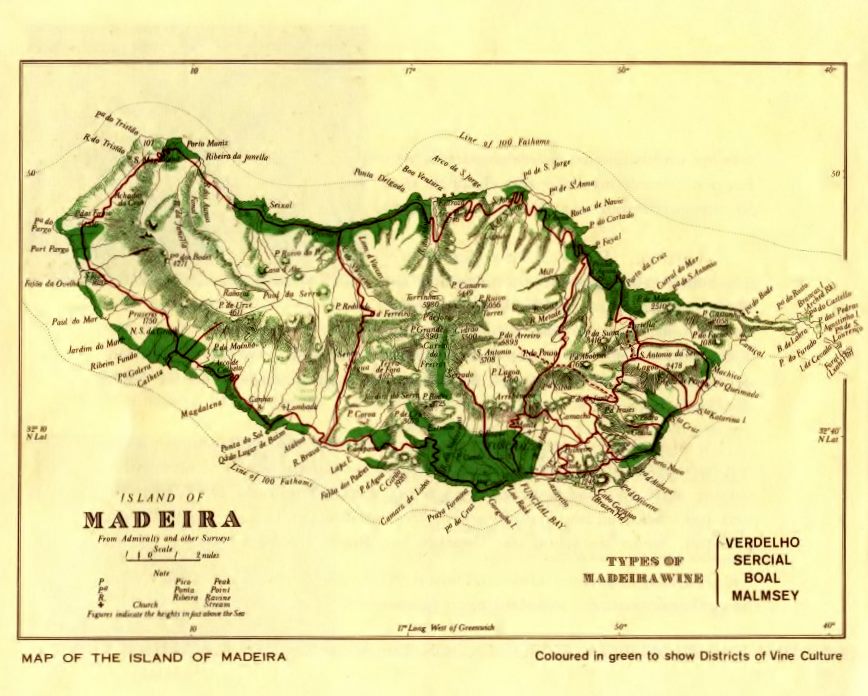 The producers of Madeira wines on the island at present are:

My thanks to Blandy’s for these succinct descriptions which I have embellished.

There is a  list of grape varieties recommended and authorised by IVBAM which includes the noble grapes and those used for Madeira’s newer Table Wines.